Camelia arrived NY for her project: a translation of Shakespeare’s work. Mysterious postcards lead her to abandon her studies, winding her way through a series of amorous detours, dead ends and new beginnings. 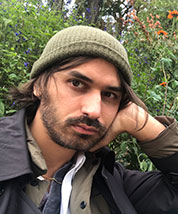 Born in 1982, Buenos Aires, Argentina. A year after completing his degree at the city’s Universidad del Cine, he made his debut feature film, <i>El hombre robado</i>. He has spent the last decade working on The Shakespeareads, a series of films focusing on Shakespeare’s female characters. He also teaches film at the Pratt Institute in New York, at Le Fresnoy in France and the Elías Querejeta Zine Eskola in San Sebastián as well as being curator of the Punto de Vista Film Festival in Pamplona.