The film captures 13 dinners of a migrant worker’s family for 14 months. Through 13 static, long takes in real-time, the film aims to craft a meditation on China’s economic boom and massive urbanization. 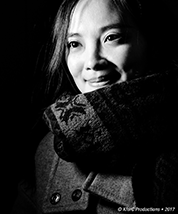