Roshell and Liliana run together Casa Roshell: A small room with a stage receives their guests with intimacy, among political performances and playbacks. 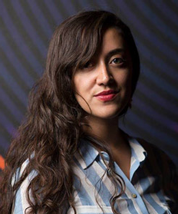